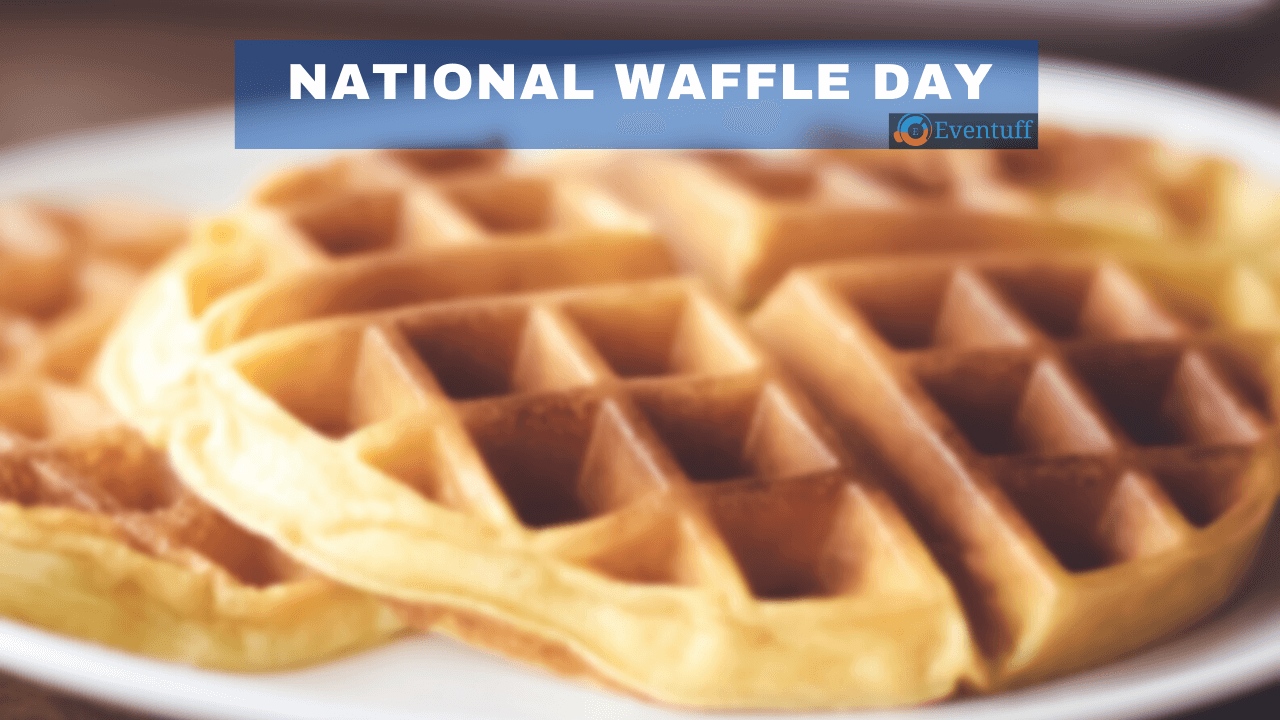 Waffles are nothing but love. There isn’t any better way to start a day than a plate of fresh, warm waffles.

But what if you get to eat waffles the whole day? This might be a “dream come true” for all the waffle lovers out there.

If you are one of them, you would definitely love to know more about what we are going to tell you.

A national day to celebrate by eating waffles. How does it sound to you? Delicious. Right? Keep scrolling and get to know more about it.

When is National Waffle Day?

National waffles day is a day when we celebrate a simple invention that inspires our breakfast to a whole new level. Waffle Iron has a long history. It got its start in the 14th century.

Back then, these metal plates were heated in an open oven over a high flame and pressed elaborated images on the batter, thus giving waffles a specific design.

This invention made making it way easier.

Swedish people took Vårfrudagen (waffles day) as Våffeldagen (The Feast of Annunciation), which they celebrate 9 days before Christmas.

Since then, Sweden has celebrated Waffle day as International Waffle Day every year.

10 Different Ways To Try Waffles- How Do You Like Yours?

There are so wide varieties of waffles, and why not because it is a treat to experiment with.

From corn toppings to egg-covered waffles, we have brought such few variations of waffles. Try them all and let us know which one you like the most.

These traditional waffles, unlike other waffles, are made with baking powder. The pockets on the American waffles are comparatively smaller.

Just because they have Belgium in their name, it doesn’t mean that these waffles are made in Belgium. In fact, these waffles originally came from America.

Belgium waffles are pretty similar to those Brussels waffles. However, the only difference is that there is no use of yeast in it while preparing.

These toaster waffles are also famous as frozen waffles, and when you want to eat them, you just simply have to toast them in the toaster and VIOLA! Your waffles are ready!

These waffles are quite similar to Belgium and Brussels waffles. The only difference is that these are a little smaller and denser than the prior ones.

This is a crispy waffle made using a decorative waffle iron that is served with sugar sprinkled all over it.

These are like those traditional denser and thinner waffles. You can top them with cornbread or chicken, whatever you like, and turn your meal into a memorable one.

Waffle Cones are just like those ice cream cones, but in this case, the waffles are thicker, larger, and made using white sugar.

If you like caramel and waffle both, then this type of waffle is something you should try.

All you have to do is just put a thin layer of caramel in between two thin layers of waffles. And you’re done.

Waffles are pretty common these days, but there are a few fascinating facts about waffles.

So roll up your sleeves and get ready to learn some shocking facts about waffles that you might have never heard of.

How to Celebrate Waffle Day?

The way you can celebrate Waffle Day is by eating waffles, obviously. But let us tell you how you can eat your waffles in a more interesting and unique way.

Below are a few of the yummiest waffle recipes that you can try to enhance the experience of your waffles to a whole new level.

So, these are suggestions to make your waffle day memorable and delicious. You can also invite your friends and family member to come and join you in this celebration.

Why is waffle special in breakfast?

Waffle is a popular breakfast item that is available in a wide range of flavors and variations. It has become popular because it is easy to prepare and cooks quickly.

Usually, we prepare breakfast meals in a hurry, which makes waffles the perfect choice for this meal.

You can serve them hot or cold and make for a quick breakfast item – perfect for busy people on the go! So these are the few things that make waffles so special.

Moreover, Waffle has been around since early times. In ancient Greece, it was sometimes served with honey and cheese.

The Egyptians considered sweet waffles one of their delicacies – they would spread honey on top of them before eating.

Although there are many versions of waffle dishes, most people agree that a traditional version includes batter made from flour, eggs, milk, or buttermilk.

There are two types of waffle days. National waffle day is the day when it is celebrated in the United States.
International Waffle day is when Sweden and other European countries celebrate it.

Q2: When Are The National And International Day Celebrated?

Q3: Who Made the First Waffle?

In the late 14th century, a husband put down a series of instructions for his young wife, which became the first famous waffle recipe. Walking on water, invisibility, and power on natural elements are some of the legendary skills of Ninjas, which don’t merely exist today. According to BBC, Japan still has a couple of surviving ninjas. Moreover, the Ninjas had a dark outfit called Shino Shozoku in Japan. They could easily climb walls, trees, and houses with their… While the USA celebrates the arrival of summer with Memorial Day and Independence Day, some choose a different holiday to commemorate the transition from winter to spring. Gumdrop candies have quite a history, and their popularity has not waned over the past few decades. Why do we need a day to celebrate one of the…

Did you know that solving puzzles eases tension and is a good workout for your mind? Puzzles like Sudoku and Rubik’s Cube are valuable in evolving an individual’s numerical and critical thinking abilities. You can also develop and improve your social communication abilities by participating with others while solving puzzles. Due to the presence of… Corruption is one of the lewd acts that many individuals on Earth satanize. It dramatically affects the economy of the country or state. United Nations (UN) was the first community to confront it. Moreover, most countries have become bankrupt due to a lack of awareness and corrupt politicians. International Anti Corruption Day is commemorated to…

Do you remember those good old days of childhood when you used to play with dolls with your sisters? National Barbie Day is a day for all Barbie and Doll lovers. Everyone has some good memories associated with playing with Barbie in their childhoods. Thinking back, I remember the world of fantasy I used to…